I didn’t get a chance to post anything on Valentine’s Day because I was busy ensuring Leng received my attention.  However, I managed to quickly snap some pictures of what I served for Valentine’s Dinner.  She loves her shucked oysters, so I started the night off with some lovely wild oysters and lightly dusted them with the zest of a lemon and some Fleur de Sel.  Oh so good!  We definitely hit the wine with this meal, as we started off with an un-oaked chardonnay. [pullquote]I started the night off with some lovely wild oysters[/pullquote]

Moving on to the main, we both love a good steak so I found two beautiful, grass-fed Rib-Eye steaks at Fiesta Farms.  I picked up 4 wild lobster tails on my way home and with a loose plan, formulated a meal.  I created sort of a chocolate mornay sauce:

I seared the steaks off in a skillet with not moisture, approximately 5 minutes a side, then into the oven on a grill rack for about 10-15 minutes (we like our steaks medium rare).  Once the steaks were ready, I took them out of the oven, put them on a plate and loosely covered with foil to rest.  During this time we steamed our lobster in their shell (I find the meat is a little tastier as opposed to dropping them in a pot of water, however my absolute favourite is on a barbecue).

I have been asked if I cheat on my way of Paleo eating and I’ve stated that any cheating is usually if I’m out at family functions or out with friends at a restaurant or something then yes, I have been known to compromise, this is somewhat like the 80/20 Principle.  Tonight was no different as we were a little heavy on the wine and although you can’t really see it in the picture we have some gorgonzola cheese under the steaks… oh, I guess I’m getting off topic here.

Once the steaks had rested, I smeared some Chocolate Mornay sauce on the plates, followed by crumbled gorgonzola, then topped with our PEI grass-fed steaks.  Then taking two lobster tails per plate, I placed them on top of the steaks so they resembled hearts (hey, it is Valentine’s Day!).  I’ll tell you the sauce was great with the steak, the lobster, it didn’t destroy it, but I think if I ever try something like this pairing again, I’d add a little more heat, like smoked paprika or something.  Regardless it was a great dish and as I said previously I kept the lobster tails on top of the steaks and out of the sauce.  With the steaks we moved on to a nice bottle of Cabernet Sauvignon. It was definitely a good night.

Finally, for dessert I stole this lovely Sweet Potato Brownie recipe, and served it with a strawberry puree and a dollop of coconut cream on top. 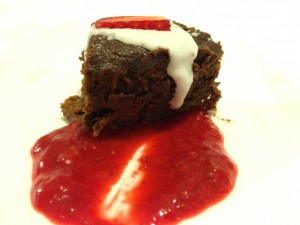 For the puree, I took a pint of strawberries, mashed them in a pot, added the juice of a lemon (the one I zested for the oysters) and reduced it.  I knew it would be tart without any honey or maple syrup, but it would compliment the sweetness of the chocolate.  As you can see from the pictures; puree, chocolate, then a dollop of cream. It was so good!