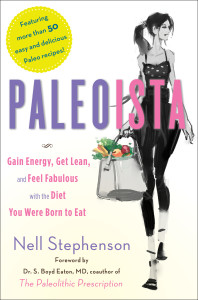 Paleoista, Gain Energy, Get Lean and Feel Fabulous with the Diet You Were Born to Eat, (A Touchstone Book, Simon & Schuster 2012).

Nell’s philosophy is style and confidence, combined with eating real food and moving has proven, time and time again, to be the winning formula for one to follow in order to be incredibly healthy, have ridiculous amounts of energy and, by the way, to achieve that lean body you’ve always wanted, all the while eating an amazing variety of beautiful foods and never feeling as though you’re depriving yourself, or feeling as though something is missing.[pullquote]It’s LouBoutins over Vibrams for me, and it doesn’t stop at the shoes![/pullquote]

Her education (BS in Exercise Science from USC and culinary school), over fifteen years experience working with clients as a private fitness trainer and nutritional consultant, Paleo expertise and proprietary modern approach to Paleo living, has given her the ability to achieve optimal health.

She’s not interested in the ‘caveman’ approach. She considers herself an athlete, but still likes her feminine side. “It’s LouBoutins over Vibrams for me, and it doesn’t stop at the shoes!”

Why she went Paleo…

In 2004, she contracted a parasite during an Ironman race.  She sought medical advice and accepted a prescription for Flagyl right away, but continued to feel worse and worse.  After six months, she was at her wit’s end.  She began to research online and, through trial and error,  discovered she had developed an intolerance to gluten.  Despite having spent six months visiting doctors and specialists (none of whom asked anything about her diet) and going to the E/R on more than one occasion, left to her own devices, she figured it out on her own.

She had previously always eaten a ‘healthy’ diet with lots of veggies and fruit… as well as plenty of ‘good old’ whole grains, legumes (lots of soy and peanuts when she was vegan for two years!) and organic dairy.  She was a ‘fit’ age group athlete on the outside, but on the inside, her GI system seemed to be rapidly progressing from the mildly annoying stomach-aches she had for years in varying degrees, to suddenly being doubled over in pain after every single snack or meal, for months!

Long story short… she stumbled across The Paleo Diet, read it, and began following it straight away.

She wrote to Dr. Cordain to simply thank him for his work and tell him what a gift it had been to her to discover it, and to share with her clients.  He wrote back, and the rest for her was history!

If this episode on The Dr.Oz Show interested you, check out this past post on The Dr. Oz Show. 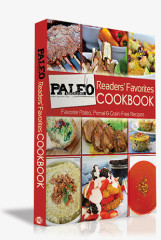